Jodi:  Sometimes you’re just in the right place at the right time.  Sometimes you just sense something is about to happen though you’re not sure exactly what.  David and I were in the car one morning when I asked him to stop and turn around.  I think he’s now accustomed to my immediate requests so, he no longer even questions why.  He just did it.

David:  Fortunately we were on a back road so I was able to comply.  My own curiosity was piqued and I wanted to see what Jodi was seeing.

Jodi:  I asked him to pull over so I could grab my camera.  At this point he was wondering what I was seeing.  We had just passed a couple sandhill cranes in a field in Seminole county.  No surprise there…we frequently see cranes wandering about…sometimes right in the middle of city streets holding up traffic.  David asked, “What did you see?”  I wasn’t really sure, just that something didn’t seem right.

These are the pictures of what we saw after I was able to grab my camera.  The pictures aren’t my best work, but I think one can get the idea of what was happening when I spotted them.  All six of these shots were taken within a minute or two.

David:  And, no, they weren’t fighting. 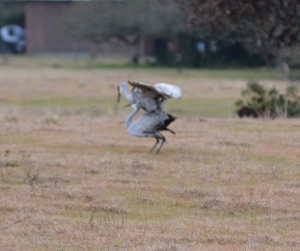 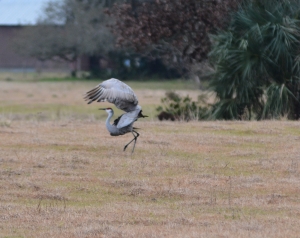 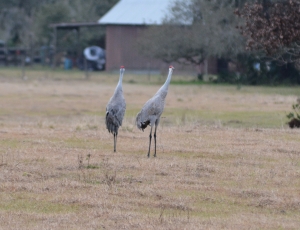 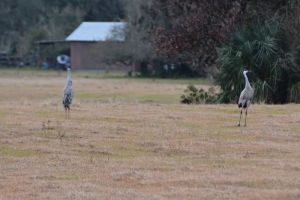 Jodi:  Since there were no flying feathers and everyone seemed happy as they were leaving, you’ve no doubt figured out that we witnessed a mating ritual!

David:  Or, at least, the denouement.

Jodi:  On to the next stop!

One response to “Right place…right time?”