Jodi:  We parked in the lot and waited for the ferry to dock and take us over to the island located in the St. Johns River.

David:  Your options for getting to Hontoon Island are either the ferry or your own watercraft of some kind.  And, while there were no ferry or admission costs (as of this writing), there was an opportunity to donate some cash on the island itself.

J:  We were barely out of the car when we met this Ibis in the parking lot. 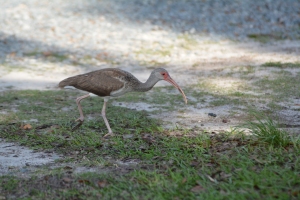 J:  As we waited on the dock we talked about this shiny plant. Good or bad David?  I’ve taken to asking that question frequently on these trips.  It seems every time I see something pretty it’s bad, invasive, non-native, etc. 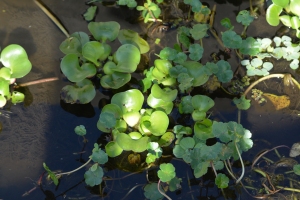 D:  Well, we’ve got several species growing here.   The shiny plant is water hyacinth which is definitely non-native and causes issues.  There’s also some water lettuce which I guess the jury is still out on as to whether it can be considered a native species.  Also have some pennywort and duckweed which are OK and…sorry…what was the question again 😉

J:  Lots of small fish right here in the water.  As a kid I would’ve scooped them up to take a closer look.  Today I’m content to check them out from the dock. 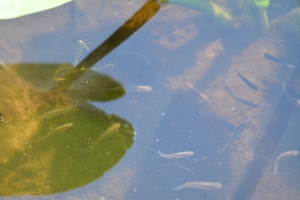 D:  It would have been interesting to get a better look.  The St. Johns River and the lakes along it can be full of “surprises”.   Marine or saltwater species such as Atlantic needlefish and stingrays share this river with freshwater species like crappie and bluegill.

J:  After a short trip with the kindly boat captain across the St John River, we were on the small island.

J:  After a short walk, we were on one of the many trails.  This live oak shows just how the deep the water can get here when the river floods. 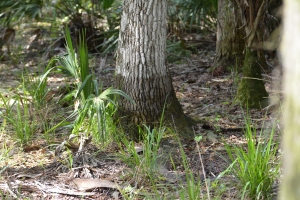 D:  Called the “lichen line” because involved lichen species do not tolerate being submerged under water.  They stop growing and the line is established.  It can change over time depending on future water levels.

D:  My understanding is that pygmy rattlesnakes are responsible for more bites than other rattlesnake species.  They are supposed to have a feisty attitude and they are fairly common.  I read something about finding these snakes in the garden sections of big box stores…now there’s a thought!

J:  I’m just glad I saw it before it saw us.  The big, brave photographer (me) kept David in between me and it.  Once again I HATE snakes! 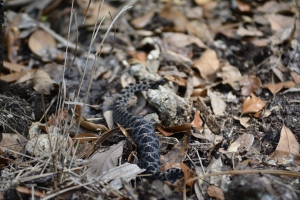 D:  Once again…the human shield!  This one wasn’t going anywhere for a while.

What do you think?

J:  The trails on this small island can take a few minutes or several hours depending on your energy level. 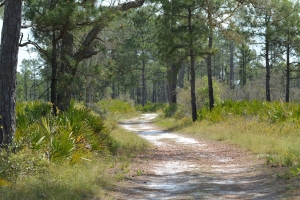 D:  I guess small is relative.  This thing is over 1600 acres in size.  The trail system is set up to accommodate just about anyone’s energy level.  We tended to lean toward the several hours level which meant taking along plenty of water, sunscreen and a hat.  It was generally easy going, but not a lot of shade.

J:  You and what army? Look closely…

D:  Supposedly not aggressive, but tempting fate could bring a painful sting!

D:  This lyonia is usually found in wetter areas, is native and, I think, an attractive plant, especially in bloom.

D:  At first glance this “pile” looked like bear poop, err, scat with palmetto berry pits as I’ve seen a number of times before…until it started moving!   Yep.  Dung beetles.  I just had to check into these beetles later and came across articles where folks claimed that their pet’s backyard “leavings” kept disappearing.  Yep.  Dung beetles.  Who knew? 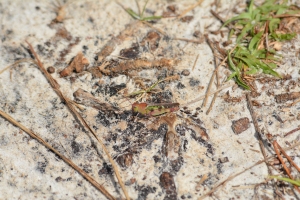 J:  These tiny low growing plants look like they should be growing in Who-ville!

J:  A lovely patch of flowers to bid good-bye for now.   Get out there and see some…wherever you are!

D:  This adventure was not quite over…for me anyway.  If a place looks “ticky” it’s probably best to do a tick check at your earliest convenience.  There were signs here warning of the possibility of ticks.  Sparing most of the details, let’s just say that I had a hitch hiker for several hours before I noticed its presence.  It was fully “involved” which still freaks me out a bit.  Save yourself the hassle and check at your earliest convenience!  (And, yes, I should know better!)