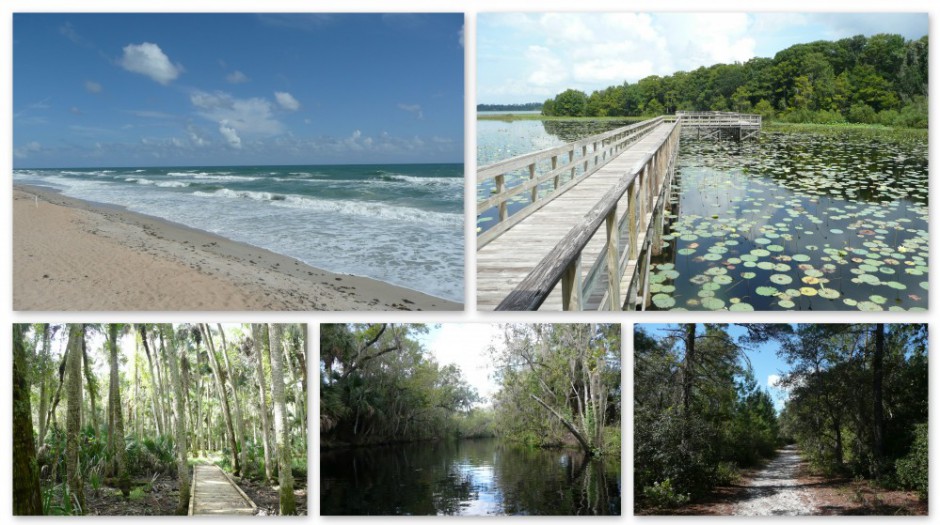 David:  We scheduled our biking day for a Sunday.  We wanted to get on the road fairly early in the morning so, Jodi’s husband, Jeff, and I loaded the bikes in my vehicle Saturday night.  As I suspected, there were three bicycles and no lounge chair as was called for in the original, i.e. Jodi’s plan.  This trip was going to be interesting!

Jodi:  The plans were made and the day had come to bike and tan at Canaveral National Seashore (CNS).  The guys were going off on their bicycles and I was going to soak up some rays.  I wanted to finish up that John Grisham novel I’d started.  Yeah!  Dave’s SUV was loaded and ready to go.  I called ‘shotgun’ and climbed in the front passenger seat.  I looked back to see Hubby and three bicycles.  Three?  Is my chair back there?  Nope!

I gave him that wife to husband ‘you’ve got to be kidding me?!’ look.  He just laughed and said you’re going with us.  Great I thought.  The last time I was on a bicycle, I was nearly hit by a car.  It was completely my fault.  I’m not exactly known for my gracefulness.  But that’s what this blog is about…getting up and out and doing new things.  Ok, I’m a good sport, I’ll roll with it. (Pun definitely intended.)  As it turned out, Hubby who is a Florida native didn’t know there were North and South Districts of CNS either.

Once again we paid our car fee at the North District entrance and drove through the gate.  We immediately noticed that we should’ve arrived earlier than 9:30 on a Sunday morning.  Our intended base at #5 (remember Mr. Allover) was parked full.  So we parked at #4 and unloaded the car. We were off for some exercise.  I didn’t take many photos on this trip because, once again, I’m just not graceful.  But I’m happy to tell you about my experience.

David:  An uneventful drive got us to the Seashore at about 9:30am.  Being a weekend day, we could see that, even at this hour, there was more activity and traffic than Jodi and I had experienced before.  We drove straight to the south end of the property and found that Parking Lot 5 was already full…religious services for freedom-seeking individuals?  Just a popular spot, I guessed.  Anyway, we found parking in Lot 4 and unloaded the bikes and gear.  With water bottles in place and suntan lotion applied, we were ready to hit the road. 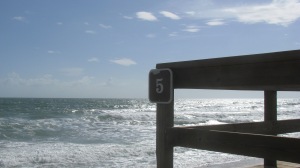 Looking for any potential “scenery”

Jodi:  With me in the lead we pedaled toward #5.  Come on, of course I had to look.  I forgot to mention that Mr. Allover was not offensive looking.  No sign of him or anyone else in his state of undress.  There was a man surf fishing and some families with umbrellas.  I think the guys were hoping for some Ms. Allovers.  Hey, we’re human! 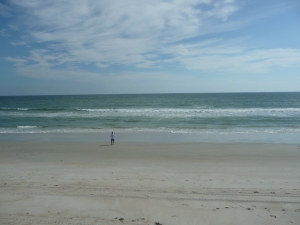 David:  Like moths to a flame, we headed back south to Lot 5.  No surprises this time.  A number of folks were simply enjoying their day fishing, sunbathing and walking the beach.  This was a place where the intrepid could REALLY walk if so inclined.  We’ve mentioned before that this location was the northern district of the National Seashore.  There was also a southern district which includes Playalinda Beach and may be the area of the National Seashore more people are familiar with.  These districts were separated by Klondike Beach which has no roads.  Access would appear to be by boat or foot.  The scale on my map shows this stretch of beach to be about 15 miles long.  I think we’ll save that walk for cooler weather! 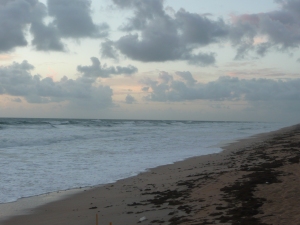 Jodi:  Stop #5 behind us, we took Hubby to Castle Windy.  We pushed our bikes through the trail and out to the lagoon.  That day there was a quiet fisherman taking in the serenity of the Old Channel.  We said hello and quietly discussed the midden with Jeff.  Not wanting to be disrespectful of the fisherman, we waved and left him to his spot.

We rode our bikes back out because it was much easier than walking them.  I’ll admit, it was tough on me but I managed.  Ms. Graceful was getting into a rhythm now and I was keeping up with the boys.  My butt was begging for mercy from my bicycle seat.  However, this was now a personal mission.

David:  We decided to show Jeff the lagoon view and shell middens at Castle Windy.  Heading north on the main road, we were just about head high with the vegetation on both sides of the road which allowed us to catch glimpses of the water on both sides of us.  The vegetation shielded us from a pretty brisk wind coming off the ocean while still allowing just enough air circulation to keep us relatively comfortable.  I was hoping to come across a scrub jay or two that might be living in this coastal scrub-type of ecosystem.  No such luck with the jays, but we did see several gopher tortoises on the shoulder of the road.  Our arrival at the Castle Windy trail head meant a brief stop to liberally apply insect repellent.  We walked the bikes through without incident and found we had been preceded by a gentleman with fishing gear.  Not wishing to disturb him or his efforts, we maintained our distance and pointed out the middens to Jeff and we all gazed out at the placid lagoon waters.  We decided to ride back to the main road which I thought was pretty cool!  (I found out later that riding bikes on this trail may not actually be allowed.  That made two “marks” against me). 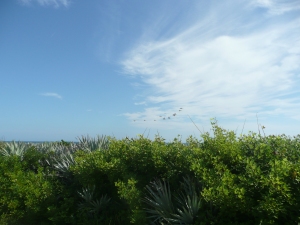 Jodi:  As we rode along the paved roadways of CNS we passed palmettos and sea grapes on the east side and cacti on the west.  This guy was out for a stroll and a late breakfast when I came to a screeching halt and grabbed my camera.   He saw us stop and I couldn’t believe how fast he could move!  Apparently it didn’t see me as much of a threat.  He actually stopped long enough for me to make this photo.  I thanked him for his time and we were off. 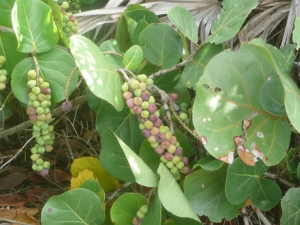 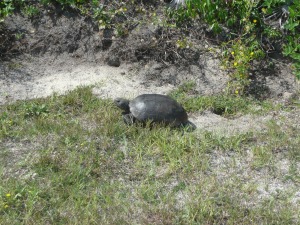 We turned onto the loop for a trip through the shade of the large oak trees. 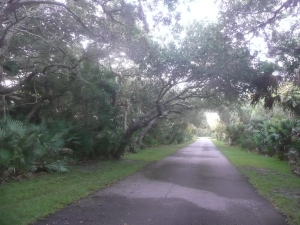 I thought these beauty berries were pretty. 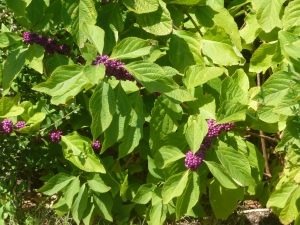 A trip out to Eldora House the boys asked?  Not this time.  We were already planning another return trip.  The natural beauty on display was breath-taking so we just pedaled along and enjoyed the view.We took Jeff out to one of the fishing docks and watched this manatee cruise right under the walkway. 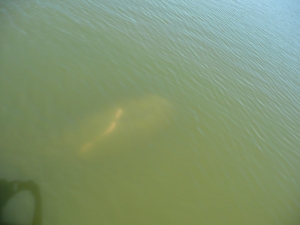 It seemed many of us had the get out and about on that beautiful day idea.  Kayakers, flats fishermen, paddle boarders, sun worshipers, sand castle builders, surf fishermen, walkers, joggers, peddlers like us, and sight-seers were all out to enjoy the day.

David:  We continued north on the main road in search of the formerly elusive pier.  We exited off the main road onto the one-way loop road and were soon riding under a canopy of arching oaks.  It was almost as if one left turn had let us enter another world which, in essence, it had.  We were riding at a slightly lower elevation than the main road and were now in a hardwood hammock type of ecosystem as opposed to the coastal scrub along the main road.  The decision was made to not pay a visit to the Eldora House located along this road, but to go directly to the pier.  Once at the pier, we realized we would have to share the view and experience with several people who were fishing.  Plenty of room for everybody!  There were actually a number of people engaged in a variety of activities in this area.  In addition to fishing, some folks were swimming and others were cruising by on paddle boards.  The paddle boarders made it look way too easy.  They were either pretty experienced or it may not have been as difficult as it looked.  It seemed as if even the manatees were getting into the act with several swimming around.  A lone manatee swam under the pier and got very close to a gentleman walking through the water to join the swimmers.  We bid our farewells to anyone and anything within earshot and got back on the bikes.

Jodi:  After approximately 11 miles, several bottles of water, a lot of sunscreen, and some bug spray, we were back at #4.  My mission accomplished, some much needed food and beverage was in order.  Next stop JB’s for another mahi sandwich!

David:  The skies were a little darker as we rode south to Lot 4 and the car.  I don’t think Jodi had ridden this distance, possibly, ever and I was sure it was going to be a while before she did it again.  My own “south end” was feeling a bit tender and being off the bike was going to be a good thing.  I noticed Jeff standing up on the pedals every once in a while in an attempt to relieve his own discomfort.  Still, I don’t think any of us would have passed up this experience.  Do it again?  When?

Editor and writer. Interested in tiny things, nineties nostalgia, old jungle mixtapes, punctuation, and my cats. Not to be fed after midnight.